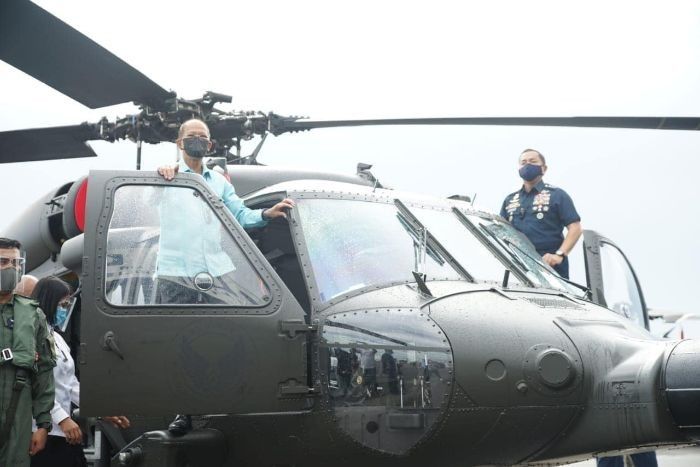 MANILA, Philippines — A teachers’ union on Thursday called out President Rodrigo Duterte for green-lighting the purchase of 15 Black Hawk helicopters for the Philippine Air Force despite the pandemic-induced hardships faced by Filipinos.

“It is verging on immoral to be stocking up on [a] war arsenal while our people reel in health and economic crisis,” said Raymond Basilio, secretary-general of the Alliance of Concerned Teachers. “What we need are vaccines, jobs, aid, food and basic social services such as education.”

Cabinet Secretary Karlo Nograles on Thursday announced the forthcoming acquisition, explaining that it was “part of plans to slowly address the growing heli-lift deficiency of our armed forces and [to] decommission all Huey helicopters,” which have figured in crash landings.

According to its manufacturer, the Sikorsky Black Hawk is a multirole helicopter whose functions include internal and external lift, combat assault, medical evacuation, aerial firefighting, search and rescue, special operations and VIP transport. It can also be armed.

“We call out the Duterte government for its grave funding mispriorities,” Basilio said. “Why is the government squandering the people’s money on senseless wars when our biggest adversary today is the crisis that wreaks havoc on all aspects of our national life?”

ACT is one of the progressive groups often accused by security forces of being a legal front for the Communist Party of the Philippines. The group has rejected the allegation.

ACT tells gov’t: Use funds to address education crisis instead

Basilio also called the plan to purchase the “war choppers” a “sharp slap in the face of all our teachers and learners who were already battered by huge distance learning costs.” All this, he added, comes “as the Duterte government continues to renege on its duty to provide for the needs of education.”

Drawing from reports on a previously military purchase of 16 Sikorsky S70-i Black Hawk helicopters which the defense department said cost $241.46 million, ACT noted that this most recent purchase could cost up to $225 million or P11.25 billion.

Basilio said this amount “can provide all our one million public school teachers with seven months of P1,500 monthly internet allowance to help facilitate distance learning and avert the learning crisis.”

He further called on the Department of Budget and Management to urge Duterte to grant teachers monthly internet allowance as well as to augment the Department of Education’s funds in order to provide employees with the mandated P10,000 Service Recognition Incentive for 2020.

ACT also called for the swift approval and release of the mandated Performance-Based Bonus for Fiscal Year 2019 for DepEd’s teaching and non-teaching staff.

“We urge the DBM to draw up a supplemental budget for education if the government intends to salvage the millions of youth who are now at risk of dropping out due to the inaccessibility and poor quality of the ill-equipped distance learning,” Basilio said.

“We also demand for the protection of the education frontliners’ welfare through the provision of ample and just benefits.” — Bella Perez-Rubio