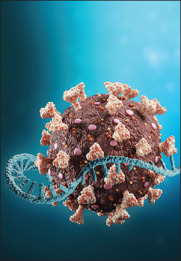 Advanced genetic sequencing techniques have undoubtedly provided valuable information on the biology and evolution of SARS-CoV-2. Never have the nearly 30 000 nucleotides of a virus been so closely considered by scientists, public health experts, and politicians alike. But the use and application of genetic surveillance of SARS-CoV-2 has varied, risking an insufficient response to a rapidly changing pandemic.

Knowledge of the virus’s RNA sequence was key in characterising SARS-CoV-2 and early sharing of its genetic data enabled the rapid development of diagnostics. The expeditious production of vaccines also owes much to information gleaned from rapid sequencing.

Additionally, sequencing combined with epidemiological data is providing real-time knowledge of the emergence of new variants and their biology. Three variants, recently identified, are of particular interest: variant B.1.1.7, first identified in the UK and now spreading worldwide; B.1.351 (N501Y.V2), first identified in South Africa and now also detected in the USA, the UK, Botswana, Ghana, Kenya, and Zambia; and P1—a descendant of variant B.1.1.28—first identified in Brazil. The situation remains worryingly dynamic. Some of these variants appear to be more easily transmitted, and there are reports that some vaccines are less efficacious against the B.1.351 variant. Vaccine roll-out will increase the possibility of other vaccine-escaping variants emerging. Mutations conferring resistance against several neutralising monoclonal antibodies—one authorised by the US FDA—and reducing the effectiveness of convalescent plasma have also been found. Public health responses will have to be tailored to such developments. The need to detect mutations associated with changes in the effectiveness of medical countermeasures is acute.

Sequencing is set to increase. In the UK—heralded as the world leader in sequencing by Secretary of State for Health, Matt Hancock—the COVID-19 Genomics UK Consortium says that it will increase SARS-CoV-2 genome sequencing to 20 000 per week by March, this year. WHO has called on African countries to “build and boost” genomic surveillance and has asked countries to ship at least 20 samples per month to sequencing laboratories, via a SARS-CoV-2 genomic sequencing network. In the USA, Anthony Fauci, President Joe Biden’s chief medical adviser, has promised to scale up genomic surveillance.

But globally, genomic surveillance of SARS-CoV-2 remains patchy. Some patterns are unsurprising. According to GISAID, which promotes the sharing of genome sequence data in the COVID-19 pandemic, many high-income countries (such as Iceland, Luxembourg, and Japan) have sequenced the most viral genomes per 1000 cases, whereas the likes of Iraq and Venezuela have sequenced the fewest. Many countries, especially in Africa, have no sequencing data at all, indicating that there are profound disparities in the ability to sequence genomes.

However, The Gambia, Equatorial Guinea, and Sierra Leone have a higher rate of sequencing than France, Italy, or the USA, suggesting that wealth is not the only determinant of capacity. Officials at the Africa Centres for Disease Control and Prevention have written that Africa has been able to swiftly adapt to COVID-19 using technical know-how gleaned from other infectious disease outbreaks. Whatever the cause, large disparities in surveillance threaten all countries’ ability to monitor and respond to the situation.

What should an appropriate genomic surveillance system look like? First, it is probably unnecessary to sequence every patient’s viral genome. But a sufficient level to detect and track mutations and their effects to inform public health responses should be a core capacity of health systems; both for COVID-19 and for future emerging and re-emerging infections.

Second, sequencing hundreds of thousands of genomes alone is insufficient. An understanding is also needed of the effects of these changes on the virus’s biology and to contextualise the findings with clinical data. This information then needs to be used to formulate appropriate and effective public health policy.

Third, SARS-CoV-2 does not respect borders. Effective viral genomic surveillance needs to be a global concern. Sequences are being made available on several different databases, websites, and platforms, and an absence of standardised nomenclature for variants is contributing to a lack of clarity.

Global genomic surveillance operating in real time is a key tool in the armamentarium of public health measures. In any outbreak it must be widely adopted, focused on seamless open data sharing, and form a foundation of the health response.