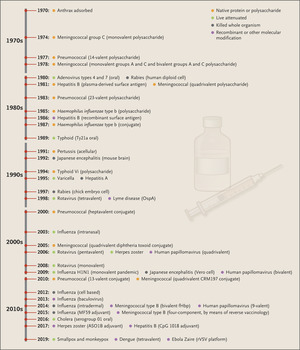 
Vaccination is a powerful method of disease prevention that is relevant to people of all ages and in all countries, as the Covid-19 pandemic illustrates. Vaccination can improve people’s chances of survival, protect communities from new and reemerging health threats, and enhance societal productivity. But achieving the promise of vaccination requires much more than the vaccines themselves. It requires appropriate incentives to encourage the timely discovery and development of innovative, effective, safe, and affordable products; effective financing and delivery programs; and credible scientific leaders who can provide evidence-based policy recommendations and reassure the public about the value of the vaccines. Since its inception 50 years ago, the National Academy of Medicine (NAM), previously known as the Institute of Medicine (IOM), has been an authoritative resource on medical issues, including vaccination, and a global leader in vaccine-policy development.

It’s hard to overstate the benefits that innovative vaccines deployed in the past five decades have had on morbidity and mortality (see timeline).1 The incidence of vaccine-preventable diseases among U.S. children has decreased dramatically, an achievement that is attributable in part to high vaccine-coverage rates. By the 2018–2019 school year, coverage rates among kindergarteners exceeded 90% in all but two states, according to data from the Centers for Disease Control and Prevention (CDC). Four vaccine-preventable illnesses have been eliminated from the Americas: smallpox in 1971, poliomyelitis in 1994, and rubella and congenital rubella syndrome in 2015 (one of us is an executive vice president at Merck, which produces vaccines for rubella, among other vaccines). Moreover, between 2011 and 2020, immunization programs in low-income countries saved an estimated 23.3 million lives.2

Perhaps the most notable immunization-related accomplishment during the past half century was the eradication of smallpox, which was verified by the World Health Organization (WHO) in 1980. In addition, global cases of paralytic polio have decreased by 99.95% from the estimated 350,000 cases in 1988,3 when the global polio-eradication program was announced, and two of the three wild-type polioviruses, WPV types 2 and 3, have been eradicated.

Other important achievements during this period include the 1986 approval of the first vaccine based on recombinant technology, a hepatitis B vaccine that not only has reduced rates of the infection in many countries but was also the first vaccine to reduce cancer risk. In 1987, the first polysaccharide-protein conjugate vaccine was licensed; since then, the incidence of invasive Haemophilus influenzae type b disease among children has fallen dramatically. In 2009, a vaccine for Neisseria meningitidis group A became the first licensed vaccine specifically designed for certain people in low-income countries.

Achieving broad population health benefits associated with vaccination requires effective policies that create incentives for vaccine development, ensure financing of vaccines, and improve access. After a measles outbreak in 1989–1991, the U.S. Vaccines for Children Program was authorized in 1993 to ensure that eligible children would have free access to all CDC-recommended vaccines. To address remaining gaps, the IOM in 2000 issued a landmark report that recommended policy and programmatic improvements to strengthen U.S. immunization programs. One outcome of this effort was the requirement included in the 2010 Affordable Care Act that plans provide first-dollar coverage (coverage without copayments or other cost sharing) for vaccines recommended by the CDC’s Advisory Committee on Immunization Practices for children and adults up to age 26.

Policy advances have also enhanced the effects of vaccination globally. The WHO launched the Expanded Program on Immunization in 1974 to increase access to vaccines. Beginning in 2000, the benefits of this program were greatly enhanced by the creation of Gavi, the Vaccine Alliance, an international public–private partnership that provides financial and programmatic support to ensure that children in the poorest countries have access to vaccines. In 2017, with the support of the NAM and other organizations, this model was used as a framework for the creation of the Coalition for Epidemic Preparedness Innovations to fund innovative vaccines and other countermeasures against pathogens that cause devastating public health consequences, such as the Ebola virus and now SARS-CoV-2.

Because vaccines are usually administered to healthy people, maintaining the highest safety standards isn’t only an ethical imperative but is also essential to sustaining public trust. The story of vaccine progress has been punctuated by both real and misguided safety concerns for as long as vaccines have been in use. Such concerns have included adverse events associated with vaccination itself, quality lapses in the manufacturing process, and false alarms regarding vaccine safety. The potential for financial gain has fueled liability suits related to putative safety concerns. The NAM has conducted ongoing objective assessments of vaccine safety to help address concerns. Between 2000 and 2004, its Immunization Safety Review Committee evaluated evidence pertinent to various vaccine-safety topics and set a new standard for independent scientific review that remains relevant as the NAM contributes to coronavirus-related policies.

Vaccine confidence depends on trust in the safety and efficacy of the products themselves, trust in vaccine manufacturers and the clinicians who administer vaccines, and trust in policymakers who assess the scientific evidence and promulgate vaccination recommendations. Failures in any of these areas can have substantial long-term public health consequences, as was the case with misinformation about measles vaccines. Enduring mistrust stemming from a discredited study that associated childhood vaccination with autism has been linked to recent outbreaks of measles in the United States.

Sustaining both vaccine safety and trust in vaccination will become increasingly complex. Vaccines continue to be approved, and more vaccines have become accessible in resource-limited countries, but safety surveillance systems are less evolved in many low-income regions than in high-income regions. Similarly, vaccines are being manufactured in regions where regulatory oversight isn’t always optimal, and counterfeit vaccines remain a threat. Emerging infections may require rapid availability of new vaccines before comprehensive safety studies are complete. Perhaps most important, the speed and reach of communication on social media platforms have created unprecedented opportunities for users to amplify misinformation and flame the fears of parents and other stakeholders in the immunization ecosystem.

Moving forward, vaccines against a range of infectious agents will need to be developed. New and reemerging pathogens, such as SARS-CoV-2 and new influenza strains, regularly appear. Viruses that are capable of spreading by vector or airborne routes — one of the most important pandemic threats — continue to emerge. More than 1.5 million as yet unknown viruses are estimated to exist in animals worldwide, and 38 to 50% of them are candidates to spread to humans.4 Global-surveillance and virus-discovery programs are therefore important, and they may be able to predict pandemics. In 2011, the IOM commissioned the development of a strategic multiattribute ranking tool for vaccines to facilitate evaluation of new vaccine targets and help guide decisions about prioritizing vaccine-development efforts.

When pandemics emerge, rapid responses are necessary. Vaccines aren’t the only available tool: passive administration of antibodies for prevention or treatment of infectious diseases has been used for many years. The Pandemic Prevention Platform program of the Defense Advanced Research Projects Agency aims to develop a new form of passive antibody protection that can slow viral epidemics starting within 60 days after identification of the pathogen and until a vaccine can be made. Thanks to new technology, the vaccine-development process is also being condensed. Experimental vaccines were developed and ready for phase 1 clinical trials in 20 months for SARS after the epidemic began in 2003 and in slightly more than 3 months for Zika virus in 2016.

The response to the Covid-19 pandemic is a prime example of how rapidly new vaccines can now be designed. By the time the WHO declared Covid-19 a pandemic on March 11, 2020, at least 37 groups from biotechnology companies and academic institutions were working on vaccine candidates.5 These candidates include live attenuated, inactivated, DNA, messenger RNA, viral vector, and spike-protein–based vaccines. Less than 1 year later, the first Covid-19 vaccine-efficacy trials have now been completed, and the first vaccines are authorized for emergency use.

Many approved vaccines, such as those against measles and polio, were made using attenuated or killed versions of the virus without detailed knowledge of viral pathogenesis. In contrast, current strategies for vaccine design rely on new technologies that lead to a deeper understanding of the immune system and of host–pathogen interactions. For new experimental HIV and respiratory syncytial virus (RSV) vaccines, a detailed structural understanding of antibody interactions with the HIV envelope or the RSV prefusion form of the fusion (F) protein is needed.

Vaccines remain the most effective tool for preventing infectious diseases and improving global health. Remarkable progress has been made with the use of vaccines, including the eradication of smallpox and the control of childhood diseases such as measles, mumps, rubella, and polio. New insights into the functioning of the immune system on a cellular and molecular level have made possible the rapid development of new vaccines. Difficulties facing vaccinologists include predicting the type and timing of the next pandemic; developing vaccines to combat rapidly changing pathogens such as HIV-1, influenza, and multidrug-resistant bacteria; and establishing rapid-response strategies to control emerging and reemerging infectious diseases. The future holds great promise for vaccine-mediated control of global pathogens, but providing affordable access to effective vaccines for everyone who could benefit from them remains an important challenge.