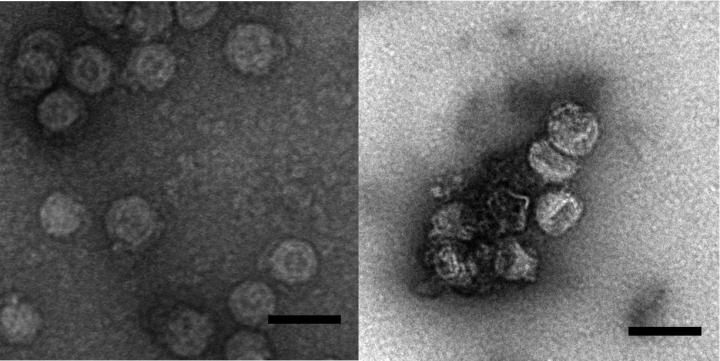 
Enveloped viruses have been detected in raw sewage and sludge, but scientists still don’t fully understand the fate and infectivity of these viruses during water purification at treatment plants. Now, researchers reporting in ACS’ Environmental Science & Technology have discovered that a standard water treatment technique, called iron (III) coagulation, and its electrically driven counterpart, iron (0) electrocoagulation, can efficiently remove and inactivate a model enveloped virus.

Enveloped viruses have an outer coating of lipids and proteins that helps protect their genetic material. Typically, disrupting this coat inactivates the virus. Until now, most studies have investigated only disinfection by chlorine or ultraviolet light as a means to control enveloped viruses in wastewater. However, particles suspended in the water can sometimes shield viruses from disinfectants. Shankar Chellam and colleagues wondered whether a different method called coagulation with iron (III), which is already widely applied during water treatment, can remove and inactivate enveloped viruses. They also wanted to study a related technique, iron (0) electrocoagulation, that shows promise for small-scale water treatment. As a model enveloped virus, the researchers chose an RNA virus, called Φ6, that infects bacteria.

The researchers treated a solution containing Φ6 with either iron (III) or with iron (0) electrocoagulation, both of which formed iron precipitates. The hydrophobic viral envelopes stuck to the precipitates, allowing Φ6 to be easily removed as the solids settled. The conventional coagulation reduced the amount of active virus in the water by more than 100,000 times in 2.6 minutes, whereas electrocoagulation was slower but about 10 times more effective. The researchers observed that the structures of most of the viral particles in the iron precipitates were damaged, which rendered them unable to infect their host bacteria. Electrocoagulation also oxidized lipids in the viral envelope, further inactivating Φ6. These results suggest that water treatment plants are already well equipped to remove enveloped viruses from drinking water by iron (III) coagulation, and viral levels are likely even further reduced by the additional treatment steps of filtration and disinfection, the researchers say.

The authors acknowledge funding from the National Science Foundation.

The American Chemical Society (ACS) is a nonprofit organization chartered by the U.S. Congress. ACS’ mission is to advance the broader chemistry enterprise and its practitioners for the benefit of Earth and its people. The Society is a global leader in providing access to chemistry-related information and research through its multiple research solutions, peer-reviewed journals, scientific conferences, eBooks and weekly news periodical Chemical & Engineering News. ACS journals are among the most cited, most trusted and most read within the scientific literature; however, ACS itself does not conduct chemical research. As a specialist in scientific information solutions (including SciFinder® and STN®), its CAS division powers global research, discovery and innovation. ACS’ main offices are in Washington, D.C., and Columbus, Ohio.

Disclaimer: AAAS and EurekAlert! are not responsible for the accuracy of news releases posted to EurekAlert! by contributing institutions or for the use of any information through the EurekAlert system.