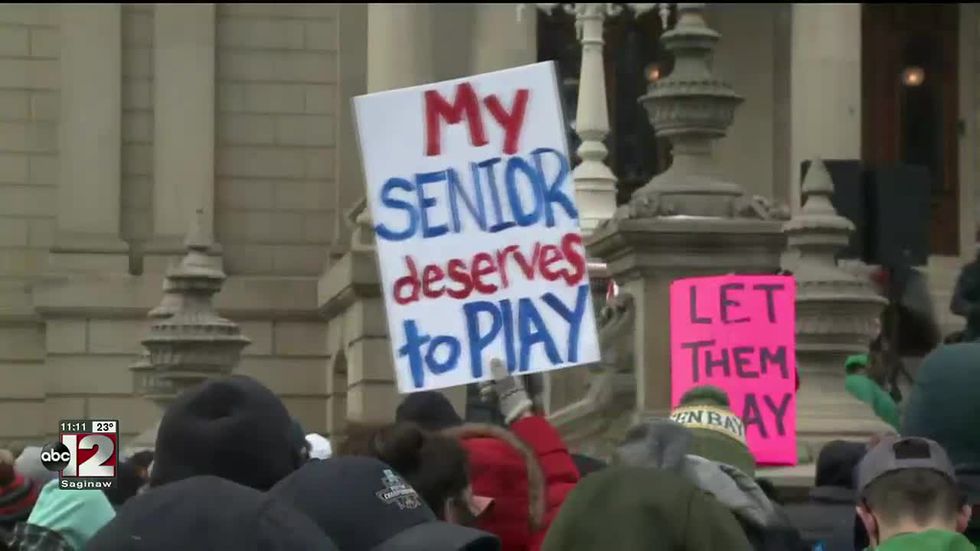 
LANSING, Mich. (WJRT) – Frustrations over a delay to high school winter contact sports reached a new level Tuesday with a lawsuit filed against the Michigan Department of Health and Human Services.

Let Them Play Michigan, an organization fighting to get athletes back in the game, is behind the lawsuit aiming to overturn a state health epidemic order, which prohibits competition in high school basketball, hockey, wrestling and competitive cheer until at least Feb. 21.

The Michigan Department of Health and Human Services epidemic order has led to a three-month delay in starting the season for those four sports. High school bowling, gymnastics and skiing are allowed to continue because they are considered non-contact sports.

The disappointment is growing among players, coaches and parents. Let Them Play, the Michigan Amateur Youth Hockey League and several parents are named as plaintiffs in the lawsuit against Michigan Department Health and Human Services Director Elizabeth Hertel.

“Unfortunately there is no other place for citizens to appeal a decision that restricts the parents and student athletes ability to pursue a key component in their public education,” said attorney Peter Ruddell, who helped file the lawsuit in the Michigan Court of Claims.

The complaint says there is no evidence linking participation in high school athletics with an increased risk of COVID-19. Ruddell listed six arguments Let Them Play Michigan put forth to the Michigan Department of Health and Human Services in a letter last week, including educational achievement being linked to athletic opportunities.

“The ban on athletic practice and competition has restricted the ability of these and many other student athletes from achieving a career pathway, competing, practicing and potentially gaining college scholarships,” he said.

Ruddell also argued that kids are still playing the banned sports — and likely in their schools — even though high school athletes aren’t in competition right now.

“We’ve got high school physical education going on. We’ve got an hour-long basketball game probably occurring right now in a PE class somewhere in the state,” he said. “But yet at 3 o’clock, student athletes can’t play basketball. I don’t understand the science behind that.”

The lawsuit is asking a judge to overturn the ban on competition for the four high school contact sports right away. The Michigan High School Athletic Association has said it will be ready to start the sports seasons quickly when it receives clearance.