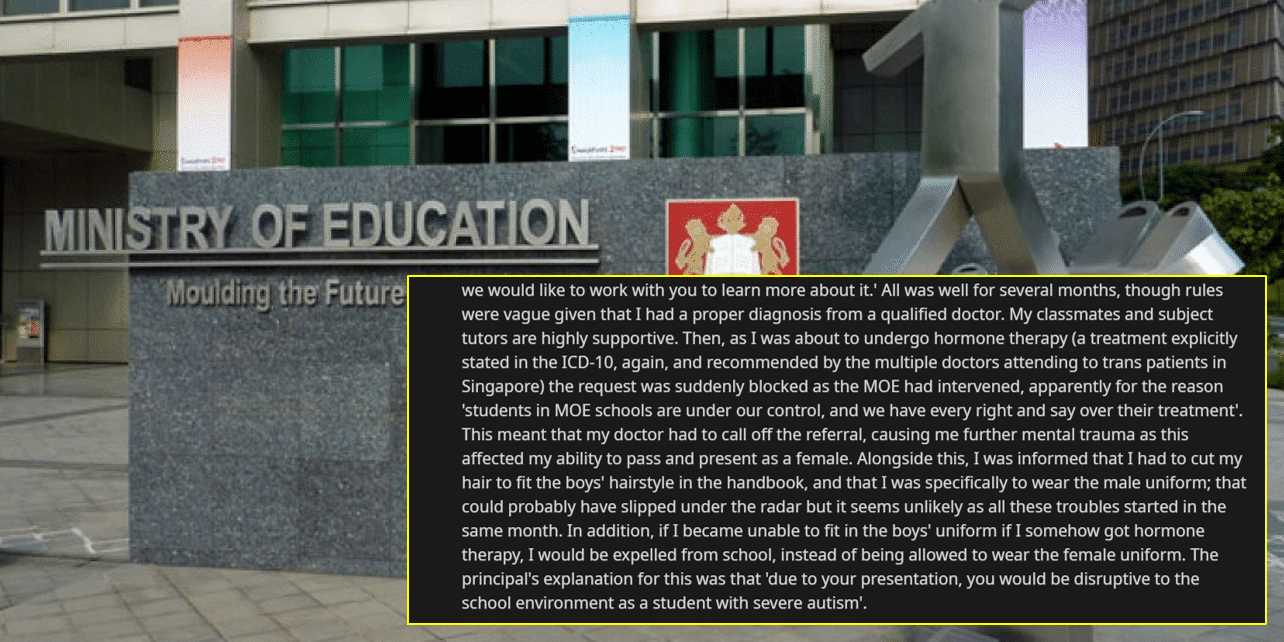 Ashlee, the trans student who earlier shared on Reddit her experience with the Singapore Ministry of Education (MOE) allegedly interfering with her hormone replacement therapy (HRT), has made an update post on the website about what has transpired over the past few weeks following her original post.

She also responded to the speech made by Education Minister Lawrence Wong in Parliament over questions on the MOE’s policies and guidelines relating to students with gender dysphoria.

Hoping that her post will serve as a reference for the discrimination she experienced as a result of receiving a medical diagnosis of gender dysphoria from a qualified doctor who prescribed HRT.

Using a throwaway account on r/SGExams, Ashlee recalled her difficult experience in school with the MOE allegedly interfering with her HRT treatment in her original post in mid-January.

She wrote, “Then, as I was about to undergo hormone therapy (a treatment explicitly stated in the ICD-10, again, and recommended by the multiple doctors attending to trans patients in Singapore) the request was suddenly blocked as the MOE had intervened, apparently for the reason ‘students in MOE schools are under our control, and we have every right and say over their treatment’.”

Ashlee’s story resonated with many Singaporeans and made waves online, sparking a discussion on the purview of the MOE, the Ministry’s policies in relation to gender identity and what might be done to help and support Ashlee and other students in similar positions.

A group of 50 LGBT groups and civil societies released a statement in solidarity with Ashlee, saying: “We are deeply concerned about the lack of institutional regulations or policies that acknowledge and protect the rights of transgender students in Singapore.”

The groups also called out the MOE for it’s handling of the issue and denial of any involvement in withholding Ashlee’s hormone replacement therapy.

In an update posted on Reddit on Tuesday (2 February), Ashlee said that she and her parents had met with the school’s administration several times over the last few weeks, noting that while the MOE and schools said they would work with her, “their overall inconsistency, intentional disregard for proper medical advice and discrimination is showing to me.”

“I have not received the level of support I had hoped for,” she wrote.

Ashlee also reiterated her criticism of the MOE for “blatantly” misgendering her in their Facebook post, despite an official memo from her doctor last year, which states her diagnosis of gender dysphoria and preferred pronouns of “she/her/hers”.

“Like the comments section suggests, this shows little interest in protecting transgender people against discrimination or acknowledgement of the medical community’s professional advice,” she reiterated.

The MOE’s conduct, said Ashlee, suggests that the Ministry purportedly being against discrimination is “a farce”.

She said that she does not see the MOE and the school working closely with and respecting professional advice as the Ministry claimed to do.

“MOE publicly encouraged me to speak to the school’s administration about this issue, which I have explicitly stated that I have done so for a long time,” Ashlee emphasised.

“To me, it seems that they are trying to deny the existence of the meeting between MOE and the doctor, which happened around July-August last year, in which the MOE insisted that schools had to work with and consent before any referral or life-changing decisions was done,” she claimed, adding that her family had already consented long before last year.

As for her interactions with the school itself, Ashlee said that in the multiple meetings she had with the school’s administration, the principal had insisted that she intended to “cross-dress in school”, which was not allowed.

“She justified it, saying ‘there is no discrimination’ and ‘we have done a lot to support you’,” Ashlee recounted.

However, Ashlee argued that as she had already been diagnosed by a doctor who explicitly stated that she identifies as female, the use of the term “cross-dressing” is “incorrect by definition”, adding, that it “would in this sense not only be an ignorant, but a horribly discriminatory term, unless I was wearing the male uniform”.

School principal rejected offer to tie up hair as per female student dress code, said ‘females can have short hair too’: Ashlee

On the school dress code, Ashlee offered to tie up her hair as per the female dress code.

This, too, was denied by the principal.

“Instead, she changed the topic by giving the excuse of ‘but females can have short hair too’,” Ashlee said.

Ashlee also alleged that the principal denied any discrimination and insisted that allowing her to use the wheelchair toilet was “a lot”.

“This is on top of another member of the administration misgendering me as I was sent out of the school compound earlier this year,” she added.

Ashlee also highlighted the shift in tune in terms of the expulsion threats she has initially received.

“As this case became public, they changed their tune to ‘we will not expel you for being trans, and you will be allowed to do home-based learning,” said the student.

Request to do home-based learning initially denied on the grounds of unfairness to other students; reason now changed to school being unable to provide resources: Ashlee

However, Ashlee also pointed out that her request to do home-based learning last November was denied on the grounds that it would not be fair to other students.

That excuse has not shifted to “they were overloaded and could not provide the resources for me”, Ashlee recalled the vice principals saying.

“Interestingly, they did not mention it being unfair to other students. How will they ensure that my home-based learning would always be available with such contradictions?” she asked.

Addressing Minister Wong’s speech in Parliament on Monday, in which he stated that schools can exercise flexibility and work out practical arrangements with students where there are valid medical groups, Ashlee said that this version of flexibility has prevented her from going back into the classroom.

“Flexibility is good, but this version of ‘flexibility’ as far as I am concerned, means preventing me from going back to the classroom or lecture rooms even though I am physically able to do so, thus forcing me to do home-based learning if I want to express my gender identity as professionally diagnosed,” she said.

“My understanding is that this is essentially coercing my parents to encourage me to cut boys’ hair (sic), present as a boy and not consent to me starting hormone therapy or face the ‘consequence’ of losing my access to proper, fair meritocratic education,” Ashlee stressed.

All of this, she added, is done without leaving her “any recourse for hands-on practice for science practicals” as a Science student, project work, or co-curricular activities.

Such activities, said Ashlee, are not only part of holistic education, but are “also beneficial for university admissions in some cases (especially the more competitive courses)”.

Touching on Mr Wong’s “culture wars” comment, Ashlee said: “As far as I am concerned, my personal dressing conforms to the female dress code, and does not affect others in the classroom, let alone personally affect anyone’s personal life.”

“Had the MOE and the school respected my doctor’s proper medical advice and scientific research, I believe this would have ended up very differently,” she added.

Thus, the issue at hand, said Ashlee, is not culture, but rather about “denying proper treatment, directly or indirectly, medical or in education or otherwise”.

“Why is the MOE contradicting and denying proper medical advice, treatment and quality education?” She questioned.