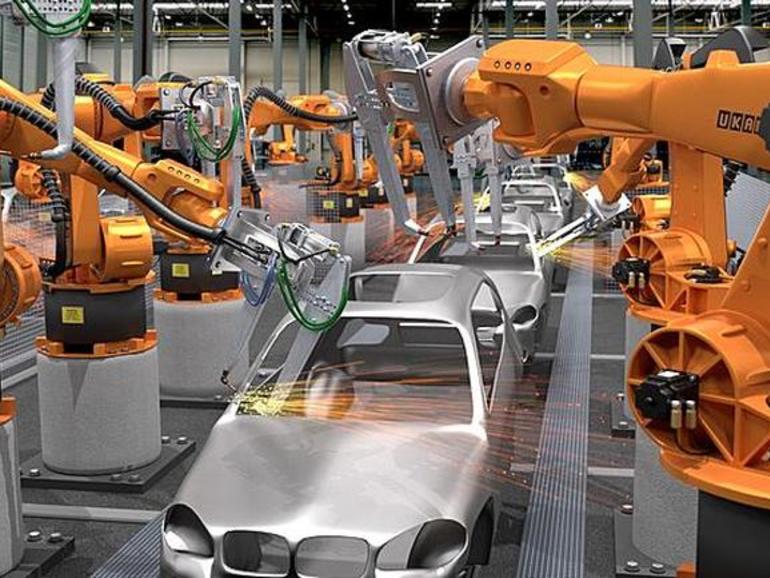 
Connectivity is the name of the game in manufacturing, and the game is getting a whole lot faster, as well as more reliable and secure. Technologies like 5G and edge computing are redefining connectivity in industrial settings like manufacturing and warehouses, bringing efficiency, reliability, and welcome security to the connected machines that make and ship the goods which drive the manufacturing economy.

Speed is the obvious differentiator with the arrival (first in private networks but increasingly in public networks) of 5G, but it takes some unpacking to understand what kinds of functionality that speed can unlock. The edge computing capabilities and lower latency of 5G opens a host of new possibilities for manufacturers to connect and manage advanced robotics, AR/VR deployments, AI, and more robust IoT installations than previously possible.

In other words, 5G will be the engine of digital transformation and a move toward greater automation in manufacturing, and the evolution has already begun. Here are some ways that a new generation of connectivity technologies will transform how products are made and distributed in the near future.

The last decade has seen the rise of autonomous mobile robots used in pick-and-place, materials handling, and light manufacturing. But the dream of a flexible, efficient manufacturing floor that hums along in the capable hands of an autonomous workforce has remained just that: a dream.

Most industrial robots remain tethered, throttled not just by power constraints (which are rapidly falling thanks to battery advancements and wireless charging) but also by networking limitations. That’s changing rapidly.

Robots, robotics, and system automation have shifted from the floor of the research lab to becoming a crucial cost, time, and energy-saving element of modern industry. Smart robots and their control systems have enabled entire processes, like vehicle assembly, to be carried out automatically. By adding mobility to the mix, the possibilities to include system automation in almost any process in almost any industry increase dramatically. But there is a challenge. How do you build smart robotic systems that are affordable? The answer: cloud robotics enabled by 5G.

The paper’s authors go on to explain that as robots become more sophisticated and smart — which is essential for mobile robots that are capable of adapting to new situations in real time — their processing needs and data collection requirements explode. It’s unrealistic to keep all that processing power onboard individual units for both technical and cost reasons. The cloud offers an elegant solution, permitting robots to outsource their processing and data management needs, but that creates another problem: building a reliable, low-latency network that handle all of in real time and without interruptions.

Cloud robotics aims to change this by putting systems intelligence in the cloud and simplified robotics on the ground. Within this model, mobile technology plays the key enabler role — connecting the cloud-based system to the robots and controllers in a system. And, it is high-performance mobility that will provide the latency and bandwidth needed to support system stability and information exchange, which in turn facilitates the building of sophisticated, yet affordable, robotic systems.

Within mobile, radio technologies will provide the wanted level of performance, and so it is the capabilities of 4G and 5G radio systems that will enable 5G cloud robotics and facilitate the uptake of robotics in new applications.

The upshot is both lowered cost (as key functionality for individual robots is offloaded to the cloud), increased reliability (as standby functions can be kept running in case a primary function fails, which would be impossible in a more bandwidth-constrained network) and more powerful computing and data sets with seamless connectivity to the cloud and the internet.

Mixed reality will be of enormous importance to Industry 4.0. For data captured by IoT and transmitted from robots on the shop floor to be useful, it will need to reach workers in real time in ways that allow them to take action. Mixed reality, and primarily augmented reality overlays, will become an increasingly useful tool for front-line industrial workers, enabling them to work efficiently and with unprecedented data and insights at their fingertips.

It’s easy to see how specialists on the floor might benefit from having easy access to metadata about the advanced machinery they’re tasked with maintaining. Indeed, AR and VR deployments are no longer exotic on the shop floor, and enterprise augmented reality, in particular, is maturing quickly.

But penetration of the technology in manufacturing and industrial environments has not kept pace with the hype. Why? Because meaningful deployments of mixed reality in manufacturing so far have been hampered by the sheer bandwidth required. With 5G, those constraints disappear. The technology offers higher bandwidth and lower latency compared to Wi-Fi, which relevant for applications that rely on video or access massive datasets in real time, such as AR/VR.

Ericsson has been piloting an augmented reality troubleshooting model at  one of its factories in Estonia.

One of the use cases being explored is AR-assisted factory maintenance. Here, 5G will provide the low latency required for sustained augmented image quality. The next-generation mobile technology will also offer high bandwidth for high-resolution image quality and connection density to guarantee that entire sites can stay connected without disruptions.

“With 5G we can connect more things to each other and to humans,” [Mihkel] Tedremaa says, adding that increased connectivity will narrow the time gap between data-gathering and decision-making. The expected results: reduced downtime, increased output, greater safety, and in the longer term, a more sustainable manufacturing process.

Beyond AR/VR, the use of AI as a functional industrial management tool will rely on the network performance boosts unlocked by 5G. While machine learning and AI are currently deployed widely in industrial settings for repetitive tasks, higher-level production control is still in the hands of humans. In part that’s a reflection of the state of AI technology, which is in its relative infancy. However, more robust networking capabilities are essential to elevating AI beyond optimizing control of individual machines and into spheres like managing supply chains and scheduling production.

According to IndustryWeek, “The 5G smart factory of the future will center on a fully connected experience. From massive device connectivity and innovative technology experiences to near real-time automation and network flexibility, 5G will help bring major advancements to the smart factory. And manufacturing companies could ultimately realize major benefits such as performance improvements, operational efficiencies, and increased safety.”

Interestingly, as telecoms have battled over 5G rollouts for public use, industry has focused on developing private networks to support their Industry 4.0 digital transformation. According to an ABIResearch report, “Private cellular networks for industrial use have the potential to boost gross margin by 5% to 13% for factory and warehouse operations that fully embrace Industry 4.0.”

That has enabled industrial-scale IoT paired with exceptionally low latency. It has also enabled more control, which is critical given how vulnerable IoT and sensor data has been to attacks of various kinds. According to the 2020 Unit 42 IoT Threat Report, 98% of all IoT traffic is unencrypted, exposing personal and confidential data on the network.

“A strong security posture portends successful digital transformation,” says Palo Alto Networks, a global IoT security leader. “Enterprises need to have constant real-time visibility and granular control of traffic passing through their networks. Only then can they detect and stop malicious activities and threats in 5G and build an effective and efficient scalable defense against IoT-based botnets.”

What’s clear is that 5G and edge computing are bringing unprecedented changes to industrial settings, offering the reliability, performance, and security that enterprises need for Industry 4.0 digital transformation, including new levels of automation and IoT-driven data capture. As the enterprise adapts to the possibilities unlocked by 5G, we’re in for head-spinning technology adoption as we edge closer to the lights-out factory.