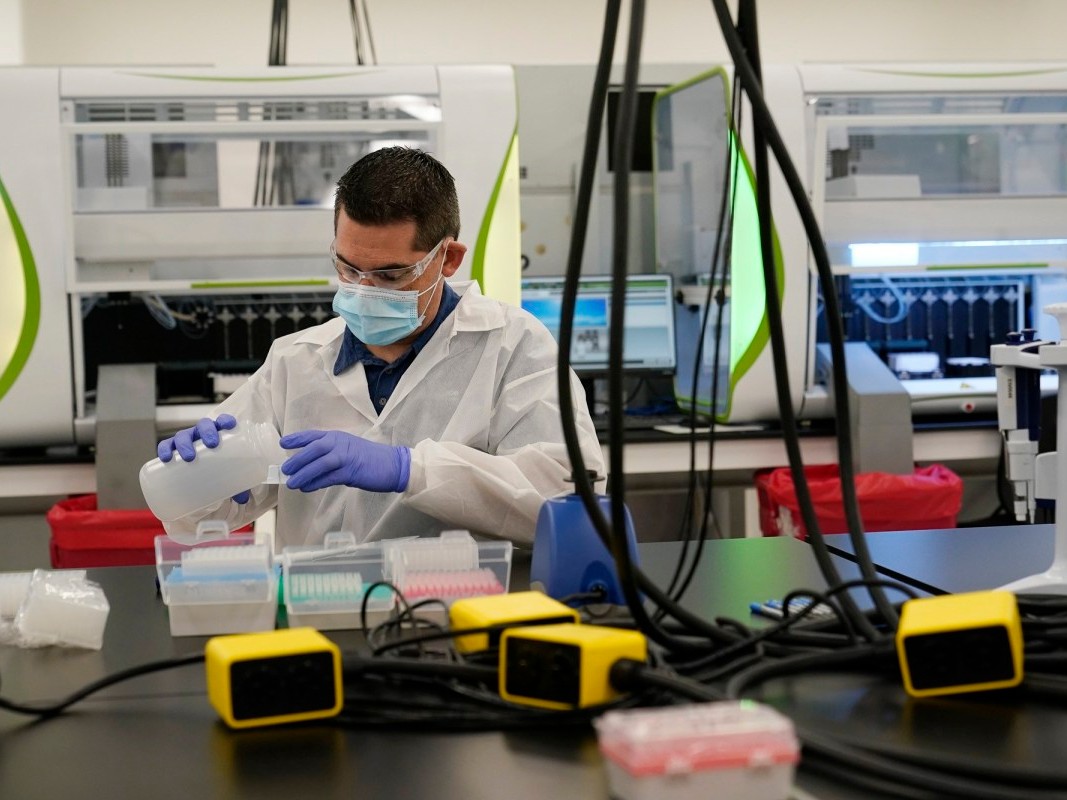 As California public health officials contend with a winter COVID-19 surge, a new threat has pushed to the fore: The emergence of dangerous coronavirus variants.

One of those variants, which appears to have originated in California, may be driving the massive spike in Los Angeles.

Viruses are constantly mutating, and researchers use a method called genomic sequencing to track those changes. Over six months ago, the state launched an effort to create a statewide network of laboratories to do this work. After spending millions of dollars, pieces of the program are in place, but the vision has not been realized.

Individual labs in California have been doing genomic sequencing on a small scale since the start of the pandemic. The sequencing process produces a sort of tracking code to map changes in the virus’ RNA over time; the more it spreads, the more it mutates. As early as June, the California Department of Public Health (CDPH) began developing its statewide lab network, called COVIDNet. The goal was to choreograph the flow of specimen samples, track lab performance and manage communications between partners.

The lab network remains fragmented, and there isn’t substantial collaboration facilitated by the state, according to participants and observers. Critics also point out that the state’s new diagnostic laboratory in Valencia is not equipped for genomic sequencing, which they say is a missed opportunity. It also has limited ability to send samples to outside labs for this work.

In addition to identifying variants that may be more contagious or deadly, genomic sequencing can help identify the source of an outbreak with more accuracy than traditional contact tracing.

Joseph DeRisi — co-president of the Chan Zuckerberg Biohub, which performs the bulk of COVIDNet’s sequencing — says a big issue is funding.

“There is no large funded effort; it’s all just a patchwork of informal collaborations,” said DeRisi, who is also a professor of biochemistry and biophysics at the University of California, San Francisco. “You can’t launch one of these networks unless somebody pays for it.”

The Chan Zuckerberg Biohub covers the cost of performing 10,000 sequences a week for COVIDNet.

CDPH points out that the network’s lab partners have had notable successes identifying new variants in California. The lab at UCSF first discovered the L452R variant in California, and researchers at Cedars-Sinai then determined the variant made up more than one-third of the recent positive cases in Los Angeles. A lab run by Scripps Research and University of California, San Diego was the first to discover a more contagious variant, commonly referred to as the “UK variant,” in California.

“CDPH has adequate resources from federal funding to support sequencing activities for the next one to two years,” a department spokesperson said in an email. “These funds have supported [the] purchase of approximately one-million dollars’ worth of equipment, and hiring of research assistants to support this initiative.”

CDPH did not respond to an emailed question asking the department to describe COVIDNet’s successes and shortcomings so far.

COVIDNet launched last year with little fanfare. Unlike other pandemic programs, there was no figurative ribbon-cutting during one of Gov. Gavin Newsom’s afternoon press conferences.

The contract, which also included consulting work on contact tracing and testing, carried a price tag of up to $1,850,000, which has since grown to up to $6 million.

The objectives outlined in the contract include:

Omai Garner, director of clinical microbiology at the UCLA Health System, reviewed the objectives in the contract. His lab has performed genomic sequencing on-and-off throughout the pandemic, working with the Los Angeles County Department of Public Health.

He says the contract’s goals remain “aspirational” and not fully achieved yet.

“I’m not sure this gets set up for this particular pandemic,” Garner said.

However, he argues that may not be a big deal right now. While variants pose a looming threat — especially ones that are more contagious or resistant to vaccines — California is still wrestling with the immediate threat of controlling the winter surge.

Garner argues the focus right now should be on clinical response, such as expanding diagnostic testing, improving vaccine distribution and supporting overburdened hospitals. The state’s funding will go further that way, he says, considering genomic sequencing “is about 10 times as expensive” as diagnostic testing.

Still, he’s encouraged by the overall effort to establish a network of sequencing labs in the long-term.

“I agree with this idea that a state utility for sequencing beyond SARS-CoV-2 is an important resource to set up,” he said. “I have no reason to doubt that another animal coronavirus is going to spill over and make its way around the world over the next 10 years.”

As COVIDNet took shape, a more high-profile effort was also underway to establish a new state laboratory in Valencia, in partnership with the diagnostics and life sciences company PerkinElmer.

The lab has processed 1.1 million diagnostic tests since it opened in late October, according to CDPH, though it has struggled to meet its turnaround goal of 24 to 48 hours.

DeRisi, of the Chan Zuckerberg Lab, says this was a missed opportunity to expand the state’s monitoring of COVID-19 variants.

“I really think that the Valencia facility should be utilized for sequencing of strains, too,” he said. “Why that hasn’t occurred yet, I don’t know.”

Additionally, the lab is limited in its ability to send out certain specimen samples for sequencing — specifically, specimens that can help determine the cause of an outbreak.

A CDPH spokesperson said in an email that local labs have been more focused on sequencing outbreak samples.

The spokesperson suggested that the Valencia lab is an improvement compared to when the state relied more heavily on commercial labs.

“Due to limitations on how long commercial diagnostic laboratories are able to save specimens, specimens are often discarded by laboratories before CDPH can request them for sequencing,” the spokesperson said in an email. “In addition, it is very difficult for commercial laboratories to extract the data from their databases that is required for sequencing.”

Still, DeRisi says sequencing in California — and more broadly in the U.S. — has fallen short.

COVIDNet “really should be a much, much larger program,” he said.

He argues it should be a tightly coordinated network of all the research universities and major biotech companies in California.

“It could be a vast network of genomic surveillance if we did this right,” he said.