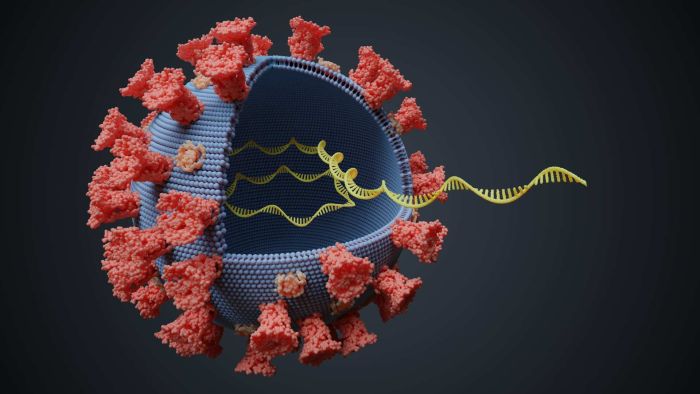 
We often hear the term “genomic tracing” bandied about in press conferences when a mystery COVID-19 case is linked to a cluster (along with a collective sigh of relief).

But what is genomic tracing, how does it work — and where has it been used before?

Even though more people are talking about it than ever, genomic tracing has been used to identify and track down disease transmission routes for years.

It relies on genome sequencing — a process that’s been around since the 1970s, but has become much cheaper and faster in the past five years.

What you need to know about coronavirus:

The laboratory has since kept tabs on and helped identify pockets of community transmission of a whole raft of diseases including tuberculosis, gonorrhoea, listeria and salmonella.

So when the COVID-19 pandemic took off, the laboratory had everything in place to sequence the SARS-CoV-2 virus, says Norelle Sherry, a clinical microbiologist and infectious diseases physician at the Doherty Institute and Austin Health.

“We already had sequencing relationships with other labs and sequencing protocols set up for many different other organisms.

“This was just a new organism for us.”

Catch up on the main COVID-19 news from January 21 with our coronavirus blog.

From swab to lab

When a throat and nose swab returns a COVID-positive result, that same swab sample is sent to a genome sequencing laboratory, like the one at the Doherty’s Public Health Laboratory.

While a diagnostic COVID test also uses the virus’s genetic material, it only looks for a very small part of it to ascertain if it’s there or not.

Breaking down the latest news and research to understand how the world is living through an epidemic, this is the ABC’s Coronacast podcast.

Genomic sequencing, on the other hand, maps out the entire SARS-CoV-2 virus genetic code — all 29,903 individual building blocks.

“It is really about looking at the whole picture,” Dr Sherry says.

The problem is the virus’s genetic material, which is in the form of a long strand of RNA, falls apart easily.

So once the RNA is extracted, it’s used as a template to synthesise what’s called complementary DNA. DNA is more robust than RNA and easier to work with.

From there, scientists must figure out the exact sequence of building blocks that make up the complementary DNA sequence.

The most common technique is known as short-read sequencing. The viral DNA is broken into 97 fragments that are copied and sequenced, by a machine, to produce short(ish) strings of letters.

This sequencing part of the process can take anywhere from around four to 36 hours, depending on the technology used, Dr Sherry says. The trade-off for greater speed, though, is lower accuracy.

Those 97 sequenced fragments are then put together, like a jigsaw puzzle, into a continuous string of As, Ts, Cs and Gs.

Next is to compare that newly constructed viral genome sequence with other sequences.

In Victoria, every SARS-CoV-2 genome sequence is compared to all other Victorian SARS-CoV-2 sequences.

This is done by lining them up and looking for any differences, no matter how small, between the 29,903-long strings of letters.

If a newly sequenced genome is pretty much identical to those from a known cluster, that’s a strong clue that it’s linked to those infections.

But it’s only part of the tracing process, Dr Sherry says.

“By combining that genomic information with epidemiological information about the case — where they’ve been, who they’ve had contact with, when they got sick — then we can use the information together to work out how the virus was likely transmitted.

“Genomics without epidemiology is not actually all that useful.”

This genomic information also feeds into a map of sorts, called a phylogenetic tree, that tells researchers how related each sequence is to every other sequence.

And because Australia has had relatively low numbers of COVID-19 cases, almost every positive test result in the nation has been sequenced.

This gives researchers a comprehensive picture of how the coronavirus spread in Australia.

“It means that we have one of the most complete population-level datasets globally,” Dr Sherry says.

But in places like the UK, where positive cases are in the tens of thousands every day, only around a 10 per cent are sequenced.

In the coming months, the Doherty’s Public Health Laboratory will also keep an eye out for genetic changes in SARS-CoV-2 that may help it dodge the protective effects of vaccines, she adds, “to make sure that we identify them early in the unlikely event that it happens”.

Want more science from across the ABC?

Science in your inbox

Get all the latest science stories from across the ABC.