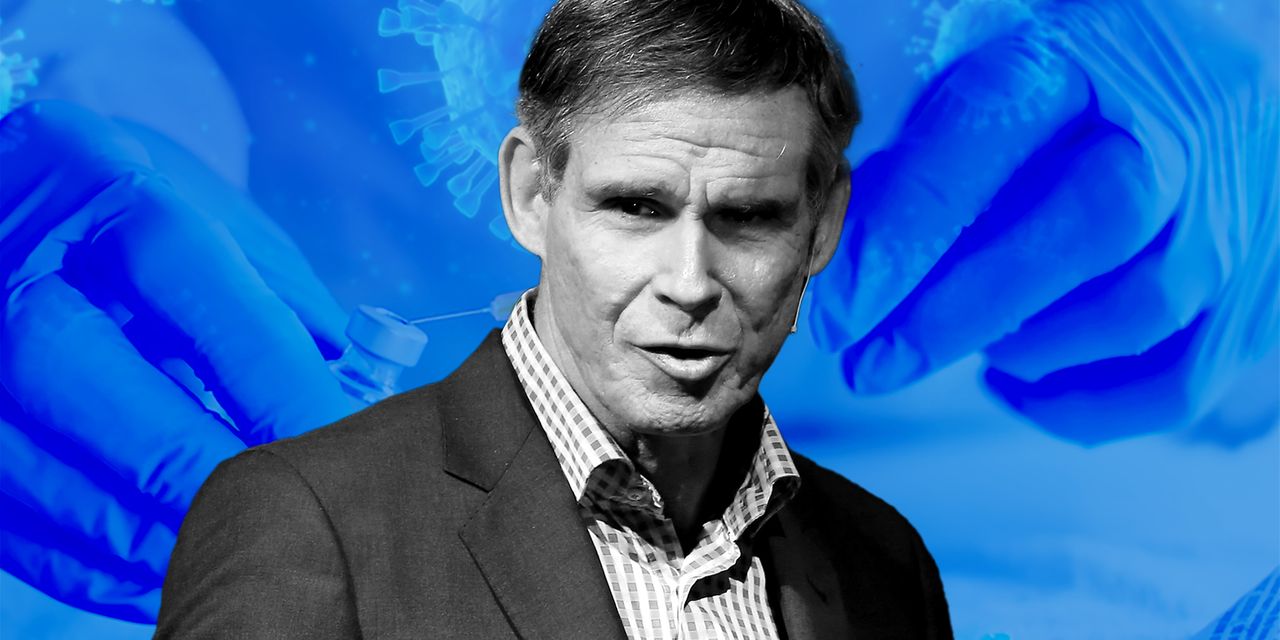 This interview is part of a series of conversations MarketWatch is conducting with some of the leading voices in the U.S. on the COVID-19 pandemic.

Of all the news about the virus that has wreaked havoc on our lives for the last year, the emergence of several possibly more infectious variants in different parts of the world is worrying.

Why? Some of the new variants, including the B.1.1.7 identified by health officials in the United Kingdom, the P1 in Brazil, and the B.1.351 in South Africa, are thought to be more transmissible, which then raises questions about infection rates, the severity of disease, and the burden on hospitals already struggling with an ever-growing number of cases.

“When they’re hyper-transmissible, they double every week,” Dr. Eric Topol, founder and director of the Scripps Research Translational Institute, said in a Jan. 13 interview. “They go exponential.”

This is why Topol, an expert on many things digital health and a longtime advocate of genomic sequencing, is arguing for wider spread utilization of genomic sequencing surveillance in the U.S. Until recently, not many people were making the case for this type of broad use of the technology, but that’s already changing, driven by fear of the new B.1.1.7 strain.

In recent weeks, President Joe Biden said the U.S. “simply [does] not have the kind of robust surveillance capabilities that we need to track outbreaks and mutations,” as he called for new funding for genomic surveillance, and Illumina Inc.
ILMN,

MarketWatch: Has the U.S. put enough emphasis on genomic sequencing during the pandemic up until this point?

Dr. Eric Topol: The U.S. has been a no-show for sequencing if you look at the world stage. We haven’t ramped up. You can see countries that are sequencing up to half of their infections. They’ll know if there’s a new variant of concern at the earliest possible time, and they can quickly determine if “X” mutation can lead to more transmission.

Countries like Australia and New Zealand, they’re up there at 40-plus percent, and the U.K. has been the champion of sequencing, not that their percentage is as high but they have done the most, by far. They have been all over this, and it’s a country that’s only got one-fifth as many people as the U.S. [The U.K. had approximately 66 million people in 2019, while the U.S. had a population of about 328 million then.] We’re at 0.2% [as of mid-December, the U.S. had sequenced nearly 0.3% of its virus samples], and they are in high single-digits. We need to be at least 5% of sampling sequencing, to know what’s coming.

Sequencing gives us many different things. It tells us how the virus is moving from place to place. It tells us how fast it’s changing. We can say it was here on this day, and it was there another day. It can tell a super spreader. Take the White House Rose Garden [event in late September, after which several White House officials including former President Donald Trump tested positive for COVID-19] — those people never got sequenced. We could have determined if it came from Trump or its source. You can drill down so much and, most importantly, it can tell you if you’ve got a variant of concern that could be a five-alarm alert.

MarketWatch: How prevalent do you think the B.1.1.7 strain is in the U.S.?

Topol: It’s all over the U.S. It may be around 1%. These variants…when they’re hyper-transmissible, they double every week. They go exponential. We’re probably at just around 1%, and if you just go six or eight weeks, we’ll be at 30% to 40%. And so what is happening in Ireland and the U.K., we will have it happen here, unless we get ultra serious, which obviously is not happening right now. That’s the worst case, because that will be more people dying, more people in the hospital.

It’s a strain when it markedly changes properties. So we can upgrade the B.1.1.7 and the South African B.1.351 both to strain because they are hyper-transmissable. With the P1 from Brazil, it isn’t entirely clear. That one we will probably say is still a variant unless it becomes clear that it’s hyper-transmissible.

The other thing is, do they have mutations that are going to interfere with the vaccines? We don’t know that yet. You have to test in animals to be sure, and you need to test it with the whole virus, not just the mutation of interest. These mutations, there are 20-plus, and they interact, so if you just test one mutation, you don’t know. There’s a lot of uncertainty with the vaccines. My guess is they probably won’t interfere with the vaccines, but it’s possible they could have a modest impact. [Moderna Inc.
MRNA,
,
BioNTech SE
BNTX,
,
and Pfizer Inc.
PFE,
,
which developed the two COVID-19 vaccines available in the U.S., have said they believe their vaccines still protect people against the new strains and variants.] Someday we’ll probably see drift further where it will interfere, especially if we don’t get containment of this fire hose. The more it spreads, the more this can happen.

One more thing: It was quickly dismissed that the virus strain doesn’t cause worse disease. I don’t know that we know that yet.

MarketWatch: Why hasn’t the U.S. put more focus on sequencing? Is it because it’s been too busy putting out immediate fires, to think ahead to sequencing surveillance?

Topol: In the world there’s been probably around 400,000 viruses sequenced, and the U.S. has only contributed, let’s say, 50,000. Now, of the 50,000, number one was done at the University of Washington, and number two is at Scripps. The point is, these are academic labs that have no support to do it. There’s no grant and we’re just doing it. To get to 5%, in order to do that, you have got to get support or funding from somewhere, to get more people, more sequences, more reagents. We’ve had reagent bottlenecks. The virus samples have to come to do this, and it doesn’t just come out of the air.

MarketWatch: Was the U.K. already a leader in sequencing, or is it something they’ve focused on during their COVID response?

Topol: [The U.K.’s National Health Service] is the leading genomic center of the world. We both have been hit really hard with this virus, but their response is: We’re scaling up. They got support to do that immediately because that’s how they think there. It’s part of their culture. And even though they don’t have Illumina, and even though they don’t have Thermo Fisher Scientific Inc.
TMO,

based there, the academic labs just seized the opportunity and the need. [Illumina, though based in San Diego, is working with Genomics England since January 2020 on a genomics sequencing program in the U.K, including for COVID-19.] This B.1.1.7 is going all over the world. They put the rest of the world on high alert.

MarketWatch: With B.1.1.7, that’s considered a strain and no longer a variant?

Topol: I hate to use the term “promoted” or “upgraded” to a strain, because it’s the real deal. It is not like the original so-called wild type D614G. [This mutation, which likely occurred in Europe from the originally sequenced Wuhan strain, became the dominant strain of the virus in most of the world by mid-2020.] After being nice and quiet for a year, it developed into a monster. And the B.1.351 may be a little bit worse. That’s the one that has some interference with the neutralizing antibody, whereas the B.1.1.7 doesn’t seem to have that.

MarketWatch: If there is more emphasis and funding put behind sequencing, could that help change the trajectory of the pandemic in the U.S.?

Topol: If you found the B.1.1.7, and we were all over this, you would prioritize that for the contact tracing, the isolation, because this is a super-spreader strain. You’ve got super-spreader venues. This is a super-spreader strain, and it’s the first one we’ve had. You’d say, Okay, well, anybody who’s got this, they have a flashing neon sign on their forehead, and we got to get all over them tracing contacts because we’ve got to stop this. We’ve got to make this a priority because this one is a little wildfire.

The other thing is, you also have as your general surveillance wastewater, genomics, mobility, digital sensors. As we get vaccines out there at full tilt, we’re going to start seeing containment of the virus. And then there’s going to be places that are like whack-a-mole, the whack-a-virus where it starts to crop up again. If you’re sequencing and you’re doing these other things, you basically have a real time dashboard in the country. And you see that, Oh, wow, Kalamazoo is lighting up. It’s just one of the layers of data that we should be streaming in real time, that gives us a handle, because since this started the United States has been flying blind in every regard.

This Q&A has been edited for clarity and length.

Read more A Word from the Experts interviews:

• Dr. James Hildreth: Here’s how to instill vaccine confidence among people of color

• Dr. Zeke Emanuel says this is what it will take to fully reopen the U.S.

• People of color shouldn’t be treated equally in COVID-19 vaccine trials, ER doctor says: They should be over-represented