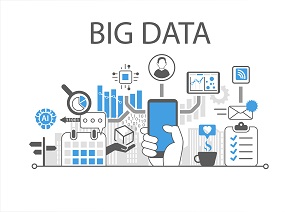 
The world of big data just keeps on turning, tossing up new opportunities, new approaches to business growth and development, and a host of new ways of handling the population’s vastly expanding data mass as it does so. As with any emerging significant shift, big data has presented a number of complications, too.

Indeed, the effects of the growing big data solutions we’re seeing are increasingly felt in a wide array of contexts, industries, and sectors, covering everything from healthcare to education, and from market research to consumer trends… and beyond. There’s no question that big data is having certain dramatic effects on big business, but many of the subtler impacts are also beginning to make themselves known, too.

The realm of intellectual property – and the myriad twists and turns inherent – is being subjected to the latest waves of cutting-edge analytic tools which fall within the sphere of big data.

Coming to grips with how contemporary data handling technology is impacting that specific niche is going to take some time, and already, plenty of the world’s greatest tech minds are turning their attention to how big data and intellectual property will collide. Personal security, business and customer data safeguarding, property rights, and copyright are all going to be major issues as big data continues to emerge, and the industry has a keen responsibility to stay on top of the changes and challenges which are yet to make themselves fully known.

The Value of Information and Intellectual Property

Big data, by its very nature, depends upon access to huge quantities of information in order to grow, to thrive, and to continue wielding its power. With more than 4 billion people online in 2020, it’s only by being able to comb through vast numbers of key data points that businesses can draw the actionable, accurate, and dependable conclusions they need.

This, unsurprisingly, creates a number of conflicts. Creators deserve and withhold the right of intellectual property protection. The digital age and the world of big data present challenges to these rights which were hitherto unimaginable.

In layman’s terms, big data is all about uninterrupted, unfettered, and fully attainable access to information; something completely at odds with traditional IP protections and rights, many of which pre-date the digital age by centuries. Intellectual property legal experts can assist with understanding the intricacies surrounding these issues and conflicts, but on the surface level, it isn’t hard to see how these points sit in completely opposing positions.

The rise of digital technology was causing problems for IP rights long before the advent of big data. More than a decade ago, peer-to-peer networks (P2P) arose that allowed individuals to share files. Many took the opportunity to share copyrighted material, and the secure browsers that were used to access P2P networks meant that this IP infringement was all but untraceable. At the time, P2P networks such as Napster were regarded as a major threat to both IP rights and data privacy. The irony is that they form the basis for the way that big data projects work today.

Because of this, big data projects and the individuals and companies behind them have a tightrope to walk; one which undertakes and facilitates the necessities of big data, and yet avoids falling on the wrong side of copyright law. Theoretically, at least, it’s necessary for those responsible for big data projects to reach out to each and every author or creator represented in any given data set, and request explicit permission for the use of their work.

It goes without saying that such necessities represent a huge strain on resources, and as such, loopholes are being exploited, and the way data is currently being collated requires urgent and often profound change.

As ever, the rabbit hole goes deeper still. Indeed, it doesn’t take a huge leap of imagination to understand that the products of big data projects themselves will also qualify as intellectual properties in their own right, and will, therefore, be eligible for the same protections afforded by copyright law.

Take, for example, the case that a format of a database can be considered a unique creation – one which cannot be infringed upon, plagiarized, or copied without the permission of the author… whether or not any of the individual pieces of data, or the conclusions they draw, are themselves worthy of intellectual property protection. As we can see, the complications at the heart of this issue are no mere trifle, and represent a considerable amount of thought for the future, alongside potential seismic shifts in copyright law itself.

The natural conclusion of this is to reconsider what actually counts as authorship when it comes to big data. After all, the majority of the ‘work’ involved is undertaken by computing software, thus creating a sizable grey area between human creators and the tools they are using in the digital age. While this clearly represents the more philosophical side of the big data IP debate, it’s rapidly being agreed that the current legislation in most regions is woefully inadequate to even begin tackling this thorny issue.

The complications continue. When it comes to the subject of intellectual property in the context of big data, there’s a further set of confusions surrounding the issue of the compilation of specific datasets. Indeed, while information can still be collated directly, it’s more usual for databases to be compiled from automatically-harvested information, gleaned from a wide array of disparate sources. This is, after all, part and parcel of the internet as we know it.

The unstoppable rise of the IoT (the Internet of Things) has given something of a carte blanche to tech firms seeking to gather gargantuan quantities of data, generated by a multitude of devices in real time, and used by consumers criss-crossing all walks of life and professional backgrounds. Certain courses on big data further demonstrate how the IoT has transformed the way that data is obtained. Training programs have already been formulated, showing anybody and everybody how this can be undertaken.

There’s also lively debate surrounding the distinction between whether or not the IoT is actually generating data which any individual (or company) might effectively claim ownership, or whether it is actually being obtained via processes involving potentially millions of individual creators.

Such debate has already begun necessitating regulatory change (most notably the globe-spanning GDPR changes of a couple of years ago, which filled our inboxes with endless checklists and boxes to tick). However, the market continues to evolve and grow, and the nature of big data and IoT continues to manifest its potential beyond anything we might have expected, even a few short years ago.

As such, legislators will have no choice but to play catch-up. Rules and laws will have to evolve alongside these changes, and ambiguity and loopholes will either have to close, or widen to the point of becoming a new normality. Time, as is so often the case, will tell.

Bernard Brode has spent a lifetime delving into the inner workings of cryptography and now explores the confluence of nanotechnology, AI/ML, and cybersecurity.