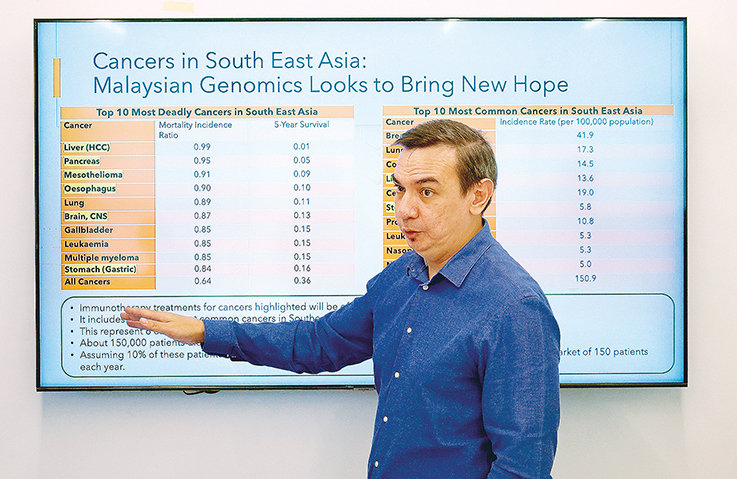 CANCER has long been known to be the deadly disease globally and is the second leading cause of premature death in Malaysia.

According to data published by the National Cancer Institute last year, the number of cancer cases recorded in the country over a period of five years from 2012 to 2016 has increased to 115,238 from 103,507 cases registered between 2007 and 2011.

The prevalence of cancer in the country has led MRGC to identify new areas it could tap into and potentially develop in the future, expanding its operations beyond genetic testing and genome analysis.

“We are a 16-year-old genomics and genetics company that has come out of about eight years in clinical pathology services.

“About halfway through last year, we started looking at new opportunities in healthcare biotechnology and we identified the area of immunotherapy, specifically CAR T-Cell products for treatment of solid cancers.

“We were looking for things that would be less affected by market fluctuations, border closures and one of those areas is cancer,” MGRC CEO Sasha Omar Firdaus Aamir Nordin (picture) told The Malaysian Reserve recently.

MGRC is now waiting for the completion of its new laboratory in Kota Damansara, Petaling Jaya (Selangor), which will be up and running by March this year.

Operations from its existing genomics and genetics lab in Klang, Selangor, will move to the 12,000 sq ft (1,114.84 sq m) new space that will also be certified to do production for cell therapies.

In June last year the group entered into a tripartite agreement with China’s ICARTAB Biomedical Co Ltd and Advanced Immune Therapeutic Sdn Bhd to be granted exclusive rights for the distribution, production and commercialisation of CAR T-Cell treatment for solid cancers.

Sasha noted that the US, Europe and China have done a lot of research and development (R&D) work for the treatment, but China has executed more clinical trials in the area compared to the western countries.

“For us, it is really the recognition of how ahead China is in terms for biotechnology R&D. They really are way out there.

“They are doing at least 33% of the world’s clinical trials for CAR T-Cell therapy and there may be more,” he said.

CAR T-Cell therapy involves taking a patient’s T-cells, which are white blood cells in one’s immune system, and engineering the cells to recognise a specific antigen on the surface of target cancer cells.

The T-cells will then be reinfused into the patient’s body to identify the cancerous cell and fight against the spread.

The two products that have been approved for the therapy are Novartis International AG’s CAR-T treatment named “Kymriah” to treat paediatric patients with acute lymphoblastic leukaemia and Kite Pharma Inc’s axicabtagene ciloleucel for the treatment of relapsed or refractory large B-cell lymphoma.

“They realised the importance of the discovery so they did something pretty amazing and they opened up the patent, which essentially allows researchers in other countries like China to learn what work Novartis and Kite Pharma has succeeded in and carry on for other areas.”

MGRC’s agreement with ICARTAB Biomedical and the approval to fit out its own laboratory for the treatment allows the company to reduce the price of CAR T-Cell treatment in the country to around RM200,000.

Apart from Malaysia, MGRC will also be the exclusive distributor of the treatment in Singapore, Brunei, Indonesia, Thailand, Vietnam, Cambodia and Laos.

Sasha Omar said as of now, MGRC is not required to open up new laboratories in other countries as the procedure allows scientists to work with samples across borders.

As long as the patient’s cells reached the lab within two days, he said scientists would still be able to perform the operations needed to genetically engineer the patient’s T-cells.

The treatment will first be available for patients in the later stage of the cancer and who have gone through unsuccessful conventional treatments.

Plans of making it available for patients of all stages in cancer, however, is in the pipeline for the group.

He urged the public to practise early screening as early detection can cure the cancer more effectively and at a lower cost.

“As we progress now, technology in biopharma, biotech or immunopharma has developed a lot, so do not give up hope. There are chances of improving the conditions,” he told TMR.

As the treatment is more targeted, it is also less harsh on the body unlike chemotherapy which has tremendous effect on the patients, said Alvin Joseph.

The common side effects of CAR T-Cell therapy is high fever that is often manageable and can be detected within the first few days after the T-cells are infused back to the patient’s body.

MGRC currently has products for six out of 10 most deadly cancers in the region — namely liver, pancreas, mesothelioma, oesophagus, brain and stomach.

It expects the segment to contribute more than 25% of its earnings by the end of this year.

Apart from the biopharmaceutical services, MGRC is also keeping busy with its new project in the scope of genome analysis involving the breeding of black tiger prawns for a private company in Johor.

Sasha Omar said the client company plans to use genetics and genomics to improve its capabilities to manage and develop its own broodstock and decrease reliance on foreign suppliers.

“Breeding has always been a part of agriculture. What genetics does is it gives the ability to accelerate the breeding by identifying the genetic markers,” he said.

The segment is expected to contribute significant earnings to the group and will help contribute to the turnaround of MGRC by the end of this year.

Sasha Omar added that there is a unique opportunity for Malaysia to establish itself in the area of breeding agriculture species.

“There are some very well established companies around the world which do nothing but breeding programmes, so they can become the main supplier for broodstock for different species. So, why not we do it in Malaysia as well.”

MGRC is also planning to explore a cross listing of its shares on Nasdaq in the future.

Although no concrete timeline is set for now, Sasha Omar said the move would allow access to markets in other jurisdictions for the group.