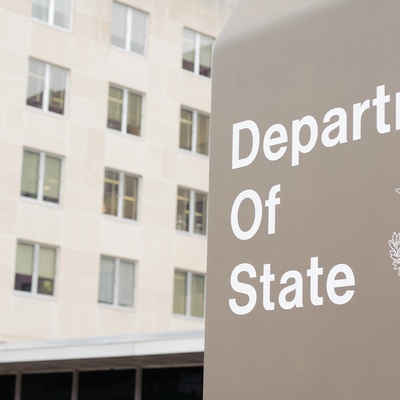 Graviss reports to Janice deGarmo, who served as the deputy director of State’s Office of Management Strategy and Solutions, or M/SS, from mid-2018 until December, when the department promoted her to be M/SS’ director. deGarmo simultaneously filled in as the agency’s first acting CDO since summer 2019, shortly after the position was federally mandated by the Foundations for Evidence-Based Policymaking Act. She spent many months on the search for State’s first fully-focused CDO.

“I think [Graviss] really exudes all of the qualities we were looking for in a CDO to be effective here,” deGarmo said during an interview last week. “But I think one of the ones that is certainly top of mind for me where he stood out is he really wants to enable the workforce to use data to solve problems and glean insights to advance the mission.”

She and Graviss briefed Nextgov on their collective vision to further arm employees across the enterprise with new tools and policies to fully harness the department’s vast repositories of data.

To fill the now-required CDO role, the department conducted what deGarmo deemed a “long recruitment process” that unfolded for a chunk of the year. “It was long because there was so much interest and we really wanted to walk through it very carefully,” she explained. “And what really surfaced in almost every interview that we had for the CDO position was generally the mission focus and sheer excitement of applicants to make an impact in the foreign policy arena with data … it was really nice to see that.”

And Graviss was one candidate who emanated that passion.

“I saw a huge opportunity to make a real impact in the foreign policy space. The global landscape is changing rapidly,” he said, adding that he shares deGarmo’s intent to harness data and analytics to “really strengthen and accelerate foreign policy decisions.”

Pointing to his prior experience within DHS, Graviss said he has a strong sense of the direction State must go. After serving at both the U.S. Customs and Border Protection Agency and Transportation Security Administration, Graviss was more recently working as the U.S. Citizenship and Immigration Services, or USCIS’ CDO—where he was also the first to ever serve in that position. That experience was both challenging and rewarding, he said, but he’s looking forward to the data-driving opportunities his latest employer has to offer.

“One of the things that was really exciting that I saw is not just the ability to affect our foreign policy decisions, but also the diversity of the data that we use at the State Department—it’s really, really incredible and I’m already seeing that since I’ve been there,” he said. “I’ve been in on several meetings as you might expect, and so we have folks that are looking at economic data in one discussion, we have other analysts looking at environmental data, and human rights data, and so many different types of data. As a passionate data person myself—somebody who likes to solve problems using data—that creates a really, really exciting environment for me to play in.”

Over the last decade, deGarmo served in both operational roles and front office policy positions at State. An exciting element of her new post leading M/SS is that it’s “at the nexus of those very things, but really at an enterprise level,” she said. deGarmo will be replacing appointee Jim Schwab as director, though she’ll be operating as a career, Senior Executive Service official. A robust team of “self-starters and change agents,” has come together within M/SS, and going forward, deGarmo said she’s delighted for opportunities to continue to modernize the broader department.

She’ll be building on a notable range of ongoing efforts to ramp up the agency’s use of data. As acting CDO, deGarmo helped form State’s Center for Analytics, or CfA, an enterprise data analytics capability intended to help officials more conveniently tap into data as a strategic asset. Since it was launched last January, CfA helped steer more than 50 projects across State’s realm. It has paved the way for new data-intensive solutions like analytics tools to measure countries’ malign influence, and helped rapidly stand a team that worked with the Office of Personnel Management to repatriate more than 100,000 Americans at the start of the COVID-19 pandemic.

“If I have to sort of zoom out and take a step back, what I’m really the most proud of is to see the department now demanding data. They’re asking the questions now—‘what does the data say?’” deGarmo explained. She added that State has made recent moves demonstrating a serious commitment to “weaving data into the fabric of everyday diplomacy.” But the ambitious endeavors also entail a pretty heavy lift, she noted, drawing from her own experience establishing the CDO role.

She added that while 2019 and 2020 were really about top-line priorities and establishing necessary foundations, 2021 will push forward that strategic, workforce enablement. And it’s the direction Graviss is looking to go as well. Under his leadership next year, CfA will be building and refining a new departmentwide internal data platform.

“This will be kind of a one-stop shop for analysts across the department to get access to the tools they need so that they can get access to the datasets they need, and access to other analytics products, which is really exciting because there’s a lot of great analysis work going on in the department,” he said. “We just need to share those best practices and what we’ve learned with others who might be wanting to elevate their game.”

deGarmo and Graviss are also entering their freshest jobs in the shadow of reports that the State Department was one of the multiple agencies affected by the recent, massive breach of federal IT systems. Regarding that stark reality, Graviss said, “having been a CDO for the last two and a half years at another agency—and now coming to the State Department—I can tell you with certainty that data security is always at the forefront of my mind.”

He pointed to the department’s first-ever enterprise data strategy, which is also in-the-making in his early days at the agency and could be released in the next handful of months.

“One of the principles included in there is of course data security so that when we make decisions about our data investments, about our data management, we make sure that security is at the forefront,” Graviss said. “It’s without question at the top of our minds.”