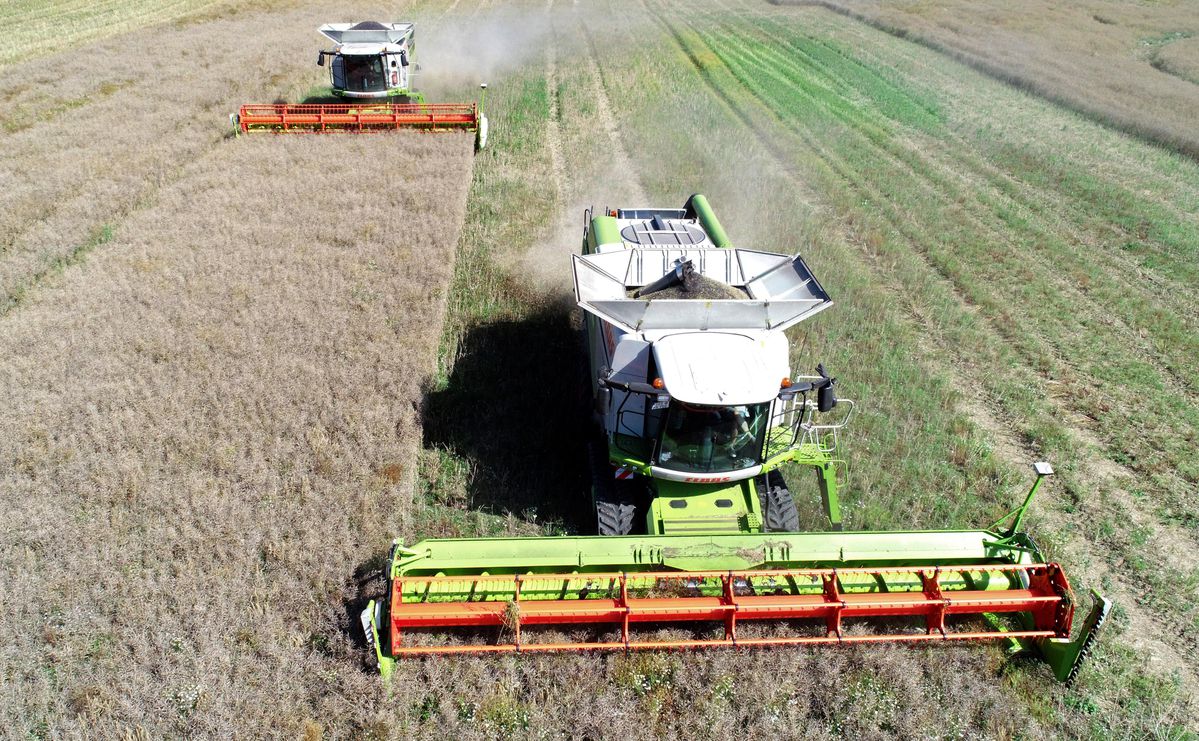 
The combine harvester, a staple of farmers’ fields since the late 1800s, does much more these days than just vacuum up corn, soybeans and other crops. It also beams back reams of data back to its manufacturer every second.

GPS records the combine’s precise path through the field as it moves. Sensors tally the number of crops gathered per acre and the spacing between them. On a sister machine called a planter, algorithms adjust the distribution of seeds based on which parts of the soil have in past years performed best. Another machine, a sprayer, uses algorithms to scan for weeds and zap them with pesticides. Meanwhile sensors record the wear and tear on the machines, so that when the farmer who operates them heads to the local distributor to look for a replacement part, it has already been ordered and is waiting for them.

Farming may be an earthy industry, but much of it now takes place in the cloud. Leading farm machine makers like Chicago-based John Deere
or Georgia’s AGCO
collect data from all around the world thanks to the ability of their bulky machines to extract a huge variety of metrics from farmers’ fields and store it online. The farmers who sit in the driver’s seats of these machines have access to the data that they themselves accumulate, but it is questionable whether they own that data and only the machine manufacturer can see all the data from all the machines leased or sold.

The amassing of all that data in the hands of the few major companies that sell farm equipment across the country or worldwide has opened up big opportunities for the “smart farming” industry, even as many in the farming community are reluctant to part with information about the fields they plow.

“I think we’re on the cusp of a real revolution,” said Seth Crawford, a vice president at AGCO, in an interview. “What’s been holding us back for a while” has been the inability to crunch data fast enough to work at the level of individual plants as opposed to, say, acres, Crawford explained. “Now, with all of the technology that’s come along and the processing speeds, we’re able to operate in much more real time.”

In one sign of a potential watershed moment, Deere earlier this year created a new role, that of chief technology officer. The company says that it now views itself as a technology company. And for its part, AGCO views itself as both “a tech company and a farm equipment company,” said Crawford, adding that the firm is actively recruiting software engineers and scientists.”

For all the advances, farmers are worried that they may see few of the benefits. Many worry that by allowing the transfer of their data to manufacturers, it will inadvertently wind up in the hands of neighboring farmers with whom they compete for scarce land, who could then mine their closely-guarded information about the number of acres they plow or the types of fertilizers and pesticides they use, thus gaining a competitive edge.

Such a scenario would be unlikely, agriculture researchers say. Equipment makers, sensitive to perceptions that they are infringing on farmers’ privacy, don’t share farmers’ data with third parties and individual farmers’ data is aggregated. Still, the concerns are partly the result of a lack of legal and regulatory standards around the collection of data from smart farming technologies, one 2019 paper argues.

One thing is clear: the value of the aggregate data.

Equipment makers with sufficient sales of machines around the country may in theory actually be able to predict, at least to some small but meaningful extent, the prices of various crops by analyzing the data its machines are sending in — such as “yields” of crops per acre, the amount of fertilizer used, or the average number of seeds of a given crop planted in various regions. Were the company then to sell that data to a commodities trader, say, it could likely reap a windfall: normally, the markets must wait for highly-anticipated governments surveys to run their course.

Mary Kay Thatcher, a former official with the American Farm Bureau, raised just such a concern in an interview with National Public Radio in 2014, when questions about data ownership were swirling after Monsanto began deploying a new “precision planting” tool that required it to have gobs of data.

“They could actually manipulate the market with it. You know, they only have to know the information about what’s actually happening with harvest minutes before somebody else knows it,” Thatcher said in the interview.

“Not saying they will. Just a concern.”